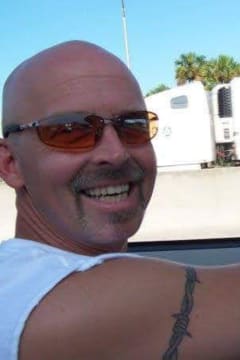 Richard Joseph Cordonnier, 55, of Rockford, IL passed away in his home, surrounded by loved ones, after a lengthy battle with cancer on Thursday, June 2nd, 2022.
Rick was born in Rockford, IL on December 5th, 1966, to Antoinette M. Trudeaux and Richard C. Cordonnier. Graduating from Jefferson High School in 1984, Rick took great pride in his professional career as a machinist, working for several of the area’s best manufacturing companies, such as Ingersoll, Mega-Fab, Advanced Machine, and finally, Fairbanks Morse, where he continued to work until December of 2021. Married Nicole Nordlof on October 28, 1994, to which they had two children, Nicholas, and Joel Cordonnier. Married Tracey Payne on April 17, 2017, to which he inherited two stepchildren, Thomas, and Christopher Roach, and became Papa to two precious grandchildren, Alaina Roach, and Jackson Roach.
When he wasn’t working, Rick enjoyed tending his garden, rooting for his son Joel at his numerous cheer competitions, watching White Sox games (or Cubs games at Tracey’s request), discussing the latest movie or Milwaukee Bucks game with his son Nicholas, getting to play outside with his beautiful grandchildren, Alaina and Jackson, and spending quality time with his many friends and family members.
Rick is survived by his wife, Tracey Cordonnier; sons, Nicholas Cordonnier and Joel Cordonnier; step-sons, Thomas Roach and Christopher (Riannon) Roach; brother, Andrew (Gretchen) Cordonnier; ex-wife, Nicole (Jerry) Cordonnier-Gibson; mother-in-law, Debra Payne; cousin, Yvonne Trudeaux; grandchildren, Alaina Roach and Jackson Roach; nephews, Matthew (Stephanie) Cordonnier and Samson Cordonnier; nieces, Sarah (Ryley) Lott and Jessica (Phillip) Sperling; and a host of beautiful grand-nieces and nephews. Rick is also survived by life-time friend and honorary brother, Steve Owen; neighbors that became family, Pat Walter, and Sharon Cottrell; beloved pets and constant companions, Rizzo, and Chloe; as well as the many friends that Rick had the pleasure of knowing over the course of his life. Rick is predeceased by his parents, Antoinette M. Trudeaux and Richard C. Cordonnier, brother, Michael A. Cordonnier, and baby daughter, Mary Antoinette Cordonnier.
The family would like to thank the many healthcare professionals that aided in Rick’s treatment and care and helped him stay with us for as long as possible. A special thanks to nurses Amanda and Angie at OSF Hospice, who brought warmth and laughter in Rick’s last weeks.
Memorial Service at 11:00am Saturday June 11, 2022, in Tony Gasparini Funeral Chapel 6825 Weaver Road, Rockford. Memorial Visitation from 10am am until service time in the funeral home. Express online condolences at tonygasparinifunerals.com