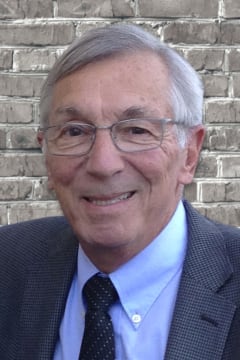 Richard "Dick" L. Gasparini of Rockford, IL, passed away on March 10, 2021. Born April 12, 1937 son of Angelo and Ida Gasparini. Richard was born in Rockford and raised on the west side, where the time he wasn't in school was spent helping his father with the family corner store at their Clifton & Ogilby home.
A star track athlete, Richard graduated from West High School class of 1955 and then took his running talents to Northern Illinois University, where he graduated in 1959 with honors in Business Administration.

After college, Richard returned to Rockford to begin his career at Sundstrand, where he met the love of his life, Carole Doty.
Richard married his lovely bride in 1962, and his three children Laura, Lisa, and Rick, were soon to follow. In addition to his home, Richard enjoyed having a large, extended Italian family throughout the Rockford area.

After 30 years at Sundstrand, Dick and Carole relocated to warmer climates in California, where he continued to work in aerospace and be close to their two daughters. He retired in 2002 from Whittaker Controls as VP of Contracts so he could enjoy his children and grandchildren, splitting time between Rockford and California.

Richard was a loving family man and tremendously supportive of his children and grandchildren. He was known never to miss a track meet, always there supporting his children Rick and Lisa, proud that they shared his passion for running. He was blessed to cheer on another generation of talented runners in his granddaughters James and Tyler. Richard loved watching all of his grandchildren play, whether baseball, soccer, or track, reveling in being their #1 fan.

Richard was an avid sports fan. When he wasn't rooting for his favorite Chicago teams, he could be found watching his adopted Dodgers and Lakers in Los Angeles. He was blessed with watching his beloved Cubs win a World Series, even attending a playoff W in their championship run.

Richard was a lifelong golfer sharpening his game from local Red Barn all the way to Pebble Beach, CA. He enjoyed having to live down his lack of holes-in-one in contrast to his wife's two.
Richard is remembered as the best husband, father, grandfather, brother, and friend one could have. His kind and gentle nature were known to all he knew or came in contact with. He never missed an opportunity to help others, always generous with his time.

Dick and Carole relished entertaining guests in all of their homes throughout the years. Whether it was a huge 40th birthday bash in their Kingsway Ave. home basement bar or a poolside celebration in sunny Chatsworth, CA, they were always the consummate hosts to friends and family. Richard thoroughly enjoyed having visitors to their homes, making everyone always feel special with his gracious and kind manner.

Thanks to his joyous spirit, Richard made everyone feel better. His passing is a significant loss to his family and friends but has left many memorable moments for everyone to cherish. He will forever be in our thoughts and hearts.

Richard is predeceased by his parents, Angelo and Ida Gasparini.
Due to the COVID-19 pandemic, no services will be held at this time. A Celebration of Life for Richard will be planned for this summer, details to follow.

In lieu of flowers, memorial donations may be made to the Parkinson's Foundation using the gray donate button above.