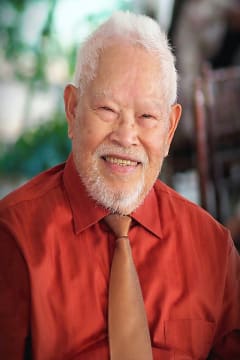 It can be hard to reconcile the totality of Tuong Nguyen’s life with the man that he was for the past thirty years. Somehow, the beloved grandfather who crept into his kitchen late at night to sneak bites of ice cream and cheese—who was, by all accounts, a mischievous man guided by his whims and appetites—was also the same person who bravely shepherded his wife and seven children out of war-torn southern Vietnam during the course of several long days and nights in 1975. He was a man of many different lives.

Born in 1934 in Thon Xuan Duc, a village outside of Hanoi, Vietnam, Nguyen was one of the five children of a pig butcher. In a bid to leave the north and start a new life in the south, Nguyen left his family and enlisted as a soldier for the French Far East Expeditionary Corps when he was a teenager. For the next few years, he traveled through the battlefields of French Indochina, hauling dead bodies away and, if the deceased were lucky, having them sent back home.

While stationed with the Army of the Republic of Vietnam in Chau Doc, a southern city bordering Cambodia, he met and married Hoa Huynh. The couple’s children recall a man who would bring home army rations from his work transporting goods for the U.S. military: leftover apples, an exotic delicacy in tropical Vietnam, and precious tubs of half-melted ice cream.

Though his family lived in one of the southernmost cities of the region, it was that work that made Nguyen dread the slow march of North Vietnamese forces in their direction. So they left, in the dead of night, on a fishing boat. After a few nights at sea, they were picked up by a Taiwanese naval ship, which brought them to Guam. From there, they flew to Fort Chaffee, Arkansas. A sponsorship by Renata Wolff, a kind stranger, and her church took them to Freeport, Ill. a few months later, where they lived until they moved to Rockford in 1980.

In Rockford, Nguyen began yet another new life. He became a leader among the burgeoning Vietnamese refugee community in the area, gathering other families up for events and feasts. He filled the garage and driveway with various mechanical projects, their parts cobbled together from area garage sales. He spent his spare time listening to old Vietnamese ballads, driving his scooter, and growing flowers next to his wife’s herb garden. A devout Catholic, he donated a new church bell to the church in his hometown in 2004.

As they grew up, Nguyen’s children and grandchildren delighted in presenting him with fancy chocolates, homemade cheesecakes, and, on occasion, huge packages of king crab legs. In return, he saved the best garage sale finds for his family: jewelry, tools, and trinkets that showed that he was still always thinking of them, too.

Nguyen died of natural causes on May 3 at home, surrounded by his doting family. He was 87.

He is survived by his wife, Hoa; seven of their children; 11 grandchildren; and three great-grandchildren. One daughter, Kim Chi Huynh, died in 2011.