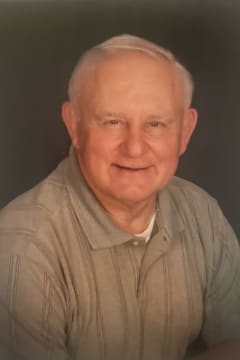 William “Bill” Kurzawski gained his heavenly wings when he passed away peacefully in his home with his wife Bonnie by his side. He was 87 years old.

Bill was born in Chicago on October 28, 1935. He graduated from St.Rita High School in Chicago, IL., and then attended Lewis University on a Football scholarship, majoring in Business and Accounting. In 1958, his graduating year, he was awarded the Father Aquinas Award for all of his achievements and involvement and the first-ever Distinguished Student Award for his devotion, Christian charity, energy, and leadership that he brought to the college community.

Upon graduation, while still helping to run the family business, Bill joined the US Marine Reserves and served for 6 years, stationed in Glenview, IL. In 1964, he married his “California Comet,” Bernadette Szczech. They started their lives and their family in Chicago, where Bill was in the midst of his career at Johnson & Johnson. Bill was transferred to Rockford, IL, in 1971 to work in the Patient Care Division. He spent 15 years with Johnson & Johnson and then went on to Manage the JCPenney Auto Center until they closed all auto centers across the country, and spent the remainder of his career at American of Madison until his retirement in 2000. After he retired, he chose to work part-time at St.Rita Parish. Bill began to show minor signs of memory loss shortly after retirement and braved the various stages of Dementia for the next 16 years, never losing his kindheartedness, his sense of humor, and his contagious laugh throughout his remaining time with us.

Bill was a devout Catholic and a member of Holy Family Parish. Early on at Holy Family, he taught Religious Education (CCD), coached his daughters in various sports programs for the school, and participated for several years as a singer and dancer in a parish event called the “Happening.” He enjoyed his travels with Bonnie to the Caribbean, Poland, and Alaska, and his many trips to and from California and back and forth to the Chicago area to spend time with extended family. He was a true “Southsider” and a hardcore White Sox and Chicago Bears fan. He was an excellent dancer, loved Polish food and the traditions of his heritage, and listened to Polka music.

Bill was a very proud father of four daughters and all of their accomplishments. He was the #1 fan of all their athletic teams and activities throughout the years. He truly enjoyed watching his family grow with his son-in-law and grandchildren to carry on his legacy. He continued his fandom with all of his grandchildren's activities, sports, and accomplishments through their school years and beyond. He was also blessed with the opportunity to enjoy the amusing behavior of his great-granddaughter over the past few years.

Bill is predeceased by his parents, William and Veronica Kurzawski, and his two younger sisters, Rita Budz and Georgeann Stroz.

A special thank you to all of Bill's Visiting Angels and his Mercy Health Hospice team (his personal nurse, his caregivers, pastor, massage therapist, and social worker) and his Holy Family homebound ministers. Bill was in great hands with so many kind-hearted people devoted to navigating him through the latter stages of his dementia journey. His life was truly enriched because of the care, compassion, and professionalism he received from each of you.

Any memorial contributions can be made to Holy Family Parish in Bill’s honor.

Funeral Mass at 11:00 am Saturday, December 3, 2022, in Holy Family Catholic Church. Entombment in Calvary Catholic Cemetery. Visitation from 5 pm until 7 pm Friday, December 2, in Tony Gasparini Chapel, 6825 Weaver Road, Rockford. Visitation is also from 10 am until 10:45 Saturday in the church.